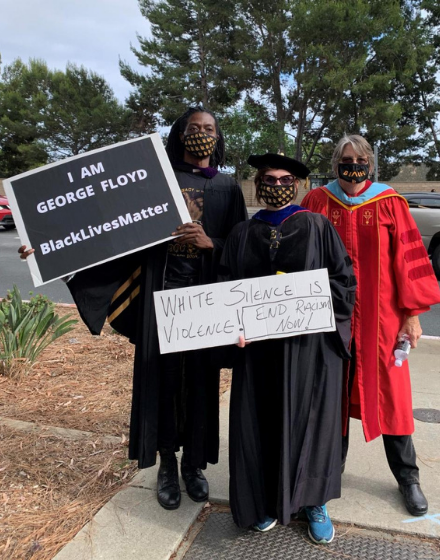 Join us for our next workshop Lecturers’ Rights: Surviving the Summer and Setting Up for Fall. This will be taking place Friday, April 29th 1:30pm-3:00pm. Zoom links will be sent out a day before the event.

Meet your faculty Executive Board members.

Representative for the Council for Racial and Social Justice

Department of Advanced Studies in Education and Counseling
Email

Useful Resources: The Collective Bargaining Agreement and Your Rights

Find out more about rights and responsibilities for faculty at CSULB.

Find important policies that govern aspects of your faculty workplace. Check out resources offered by the Faculty Center.

The Long Beach Chapter of the California Faculty Association (CFA@LB) is a social justice driven, anti-racist labor union representing over 2,500 faculty, librarians, coaches, and counselors at California State University, Long Beach (CSULB). In light of the recent Long Beach City decision to create a child detention center in Long Beach, the CFA@LB Council for Anti-Racism and Social Justices opposes the center and stands with over fifty community and legal organizations that advocate for the needs of refugee children locally, statewide, and federally.

Recently, President Conoley expressed public support for warehousing up to 1,000 children at the City of Long Beach’s Convention Center, stating “California State University Long Beach looks forward to helping our City create a secure and enriching environment for these children. We have the people and expertise to share to make a difference.” Despite these public proclamations, the university community of faculty, staff, and students, were not consulted or informed of the decision to support a detention center for migrant children. As faculty, scholars, and experts on these issues, we are deeply concerned that our administration did not consult with the campus body before unilaterally making this decision. The campus’ voicing of public support is also reminiscent of CSULB’s collusion with ICE in deporting one of our Long Beach community members in 2016. Our students held the administration accountable in their demands to designate our campus as a sanctuary campus in 2017, which it refused to do. There is no transparency around CSULB’s continued support of deportation and detention, including the current detention of children at the Long Beach Convention Center. We question the administration’s motivation to be involved in the ongoing warehousing of children, as well as the lack of analysis of the structural policies that have produced this moment in Long Beach.

Our expertise warns that relying on large-scale “intake” facilities like a city’s Convention Center to even temporarily hold refugee children is not the best practice; these spaces are not shelters but rather expand the deportation-detention prison system. Specifically, President Conoley’s public support for the use of the Long Beach Convention Center not only authorizes University personnel to act in a social service capacity, but also constructs and legitimizes a powerful public-private partnership that inflicts violence and harm through the use of governmental funds and private contracts. Furthermore, we denounce deploying CSULB’s student population as either free labor or volunteers to aid the detention of children. As denizens, we do not support the City of Long Beach’s expansion of detention, in particular, through the concerted efforts to detain young girls. We do not want to live in or support a city where Indigenous people from Mexico, Central America, and the Tongva Basin are continuously harmed through the expansion of profit-driven and white-centric urbanism.

Research also shows that warehousing refugee children in the Long Beach Convention Center will not create a secure or enriching environment. This move is not only ill-conceived but is also cruel, harmful, and traumatic to the children. If city officials, community organizations, and leaders of the university want to advocate for migrant-and asylum-seeking children, we believe they should join current grassroots efforts to organize against the root causes of forced migration such as the economic instability, poverty, and violence in Central America and Mexico brought on by decades of U.S. intervention and foreign policy.

Economic agreements such as the Central American Free Trade Agreement (CAFTA) and security initiatives like the Central American Regional Security Initiative (CARSI), the Alliance for Prosperity, and the U.S. Strategy for Engagement in Central America have further exacerbated the long legacy of U.S. counter-insurgency in what is called the Northern Triangle (Guatemala, Honduras, El Salvador). The U.S. support of the 2009 coup-d’etat in Honduras further militarized the country, increased human rights violations, and created precarious conditions for women, children, and LGBTQ communities. Instead of caging children, we must join in demanding the passage of the Berta Caceres Human Rights in Honduras Act (H.R.1945), which will prohibit U.S. assistance to the police and military of Honduras and join organizations such as the Committee in Solidarity with People of El Salvador (CISPES) in their call to end U.S. aid to the military, police, and destructive economic policies in El Salvador. These efforts are informed by just and humane values, rooted in human rights, and are simply the right thing to do.

The California Faculty Association, Long Beach (CFA@LB) as an affiliate of Service Employees International Union (SEIU) is in solidarity with the 5,800 Amazon warehouse workers in Bessemer, Alabama who are currently undergoing a union vote amidst Amazon’s anti-union activities. CFA@LB condemns Amazon’s union busting tactics and deplorable treatment of the predominately Black warehouse workers in Bessemer, Alabama, and its mistreatment of warehouse and delivery drivers throughout the world. CFA@LB stands with our union siblings in the Retail, Wholesale and Department Store Union (RWDSU).

Amazon is the second largest private employer in the United States and the world’s most valuable corporation. Amazon is also strongly opposed to unions and is mobilizing its vast resources to thwart this historic union vote in order to keep the company union-free in the United States. By mid-2020, Amazon’s market cap increased to $1.58 trillion (surpassing Microsoft) as demand for its services surged during the pandemic prompting Amazon to hire over 500,000 workers. As the global death toll from the pandemic neared one million deaths, Jeff Bezos, Amazon’s former CEO, became the first person in world history to amass a personal net worth of over $200 billion. In stark contrast to Amazon’s unprecedented profiteering for its mostly white-male executives and shareholders, its blue-collar workforce is disproportionately Black and Latinx. Amazon’s warehouse and misclassified delivery drivers continue to do all of the hard labor to ensure Amazon packages are processed and delivered on time, yet they are mistreated and disrespected by management. Amazon’s warehouse workers endure a relentless pace of work under constant surveillance in order to meet productivity quotas and performance metrics. Amazon’s “time off task” system tracks its workers productivity in order to ensure workers “make rate” which contributes to alarmingly high injury rates, stress, and substandard working conditions. Such mistreatment has prompted workers to organize for better working conditions and union representation.

CFA@LB is a social justice driven, anti-racist labor union representing over 2,500 faculty, librarians, coaches, and counselors. As a union, we support the right of all workers who are seeking to better their working conditions. We also oppose the increasing privatization of public higher education and Amazon’s rapid encroachment into the CSU system, including the opening of Amazon Campus stores (i.e. the “Amazon at the Beach” store at Cal State Long Beach) along with the widespread use of Amazon Web Services (AWS) at CSU campuses. AWS, the world’s largest cloud provider, powers Immigration and Customs Enforcement (ICE) along with other state agencies and law enforcement entities that criminalize our students and union members.

As a labor union, we understand the divide and conquer strategies that management employs, and we support our union siblings in the RWDSU and our fellow workers at Amazon in their efforts to secure safe working conditions and fair and just compensation. As faculty in the CSU, we also know that many of our students and their families work in Amazon warehouse facilities or as Amazon “gig” delivery drivers in light of Amazon being one of the largest private employers in our state. We advocate for all of our students and their families to have access to good jobs that are free from dehumanizing working conditions, including racism, sexism, and all forms of discrimination in the workplace.